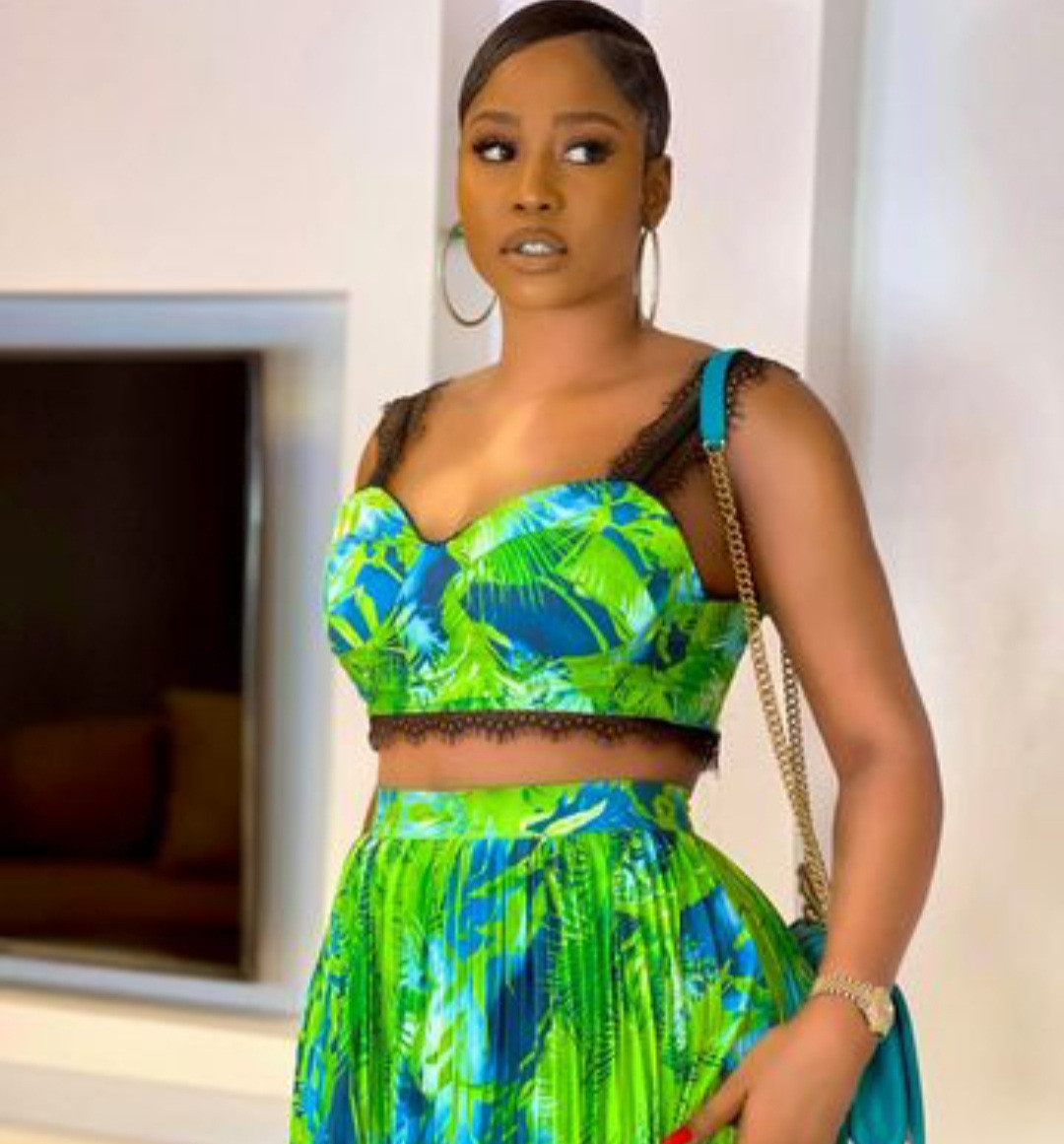 Lilian Afegbai has spoken against men who rely on women to take care of their every need.

She pointed out that it's understandable if the man is married and falls on hard times and the wife steps in to help.

However, she said a man who feels comfortable with a woman paying his bills is a"vegetable".She added that even if the woman has more, the man should keep his pride by trying to take care of her with the little he has. 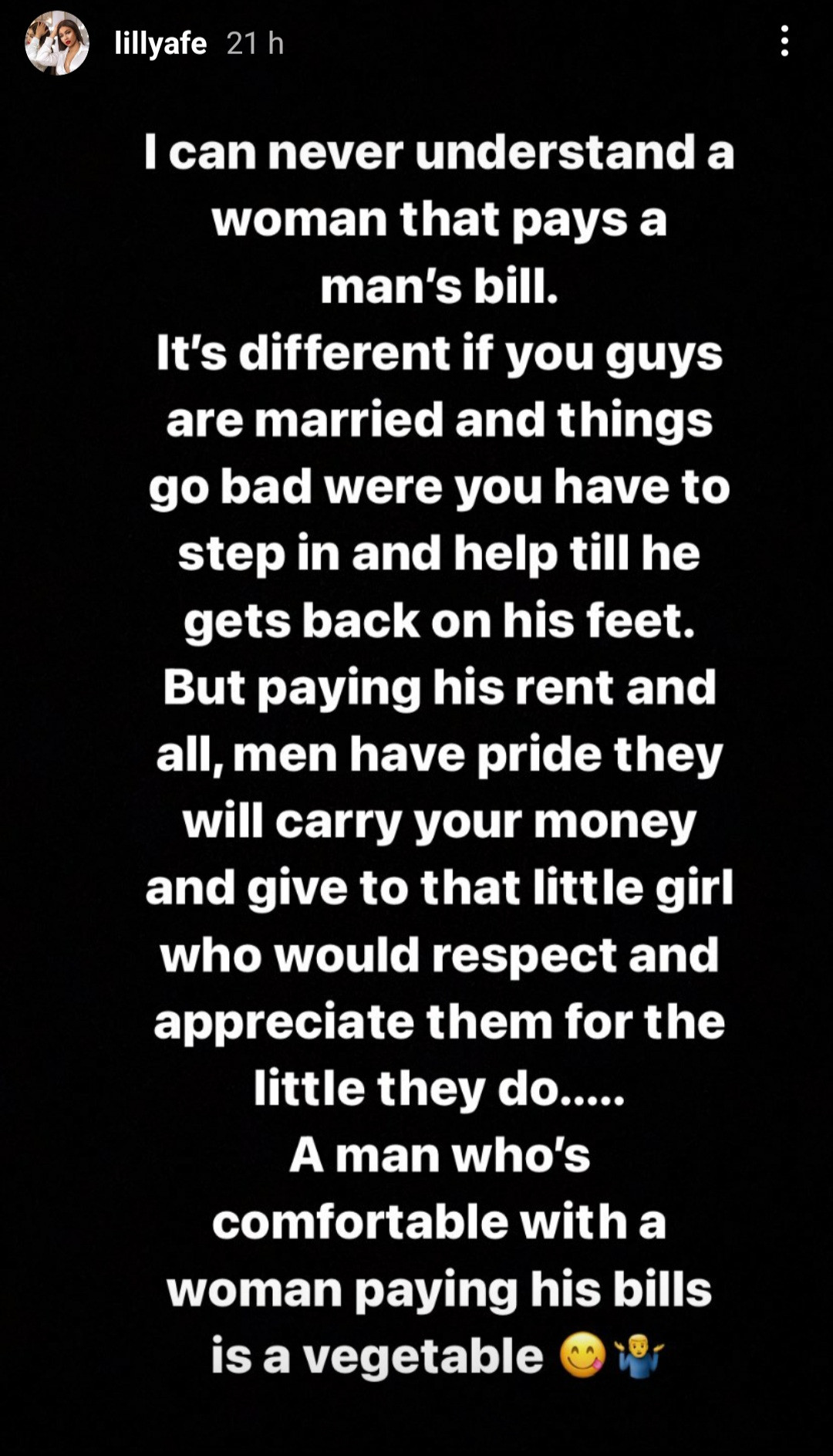 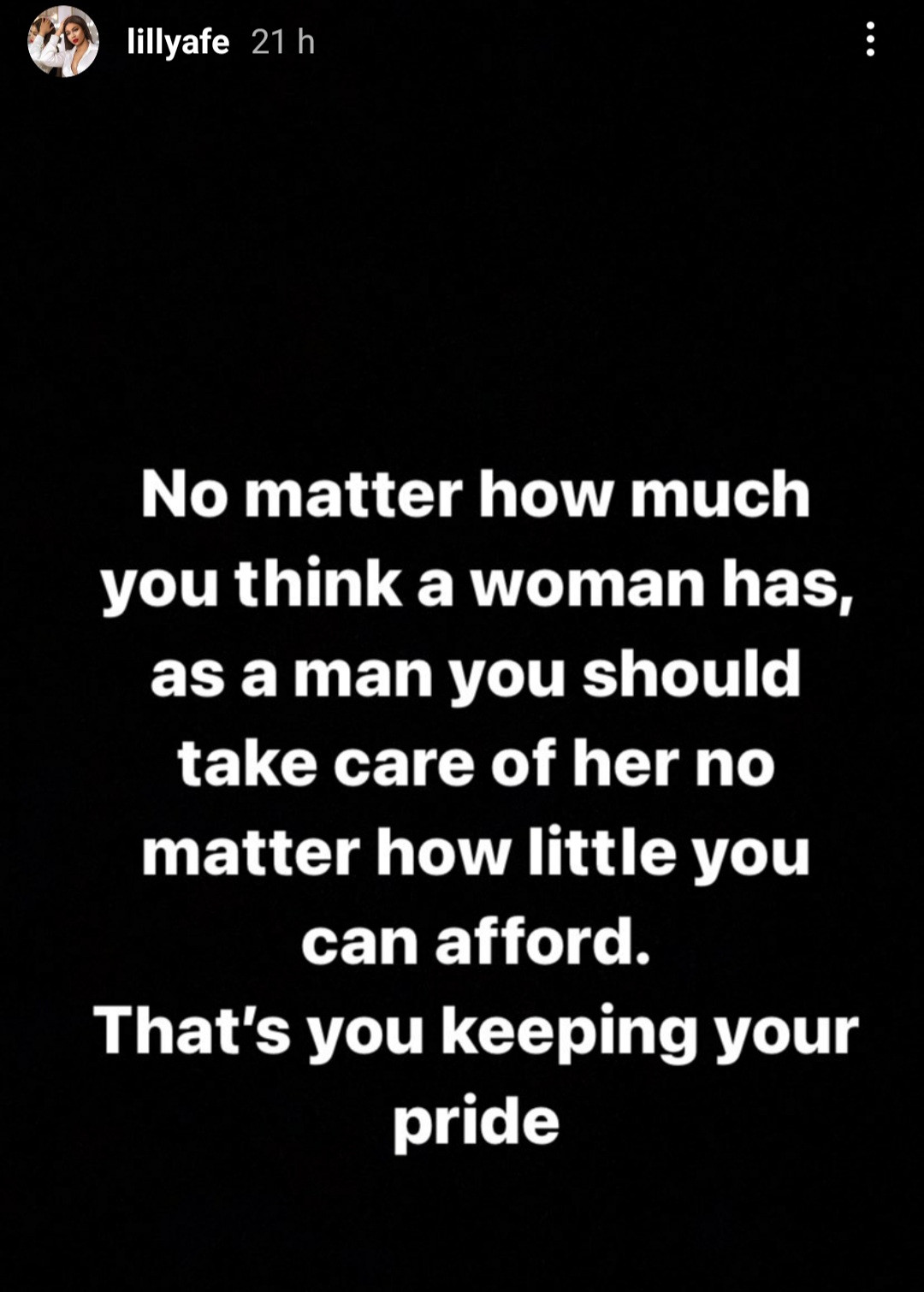 This is according to a court document indicating that the divorce which was filed by Ubi Franklin at an Abuja High Court, was granted.

The ex-wife to the music label -executive had initially filed for divorce at a Lagos court, which was denied by the Judge.

The presiding judge had on Monday July 8, 2019 ruled that the divorce proceedings have been cancelled stating further that the reason for both parties wanting a divorce is not valid.

The court also noted both parties should settle their differences and that since Lilian confirmed that Ubi provides for their child and both of them are very good friends, then there is no reason for a divorce.

The celebrity couple who got married in November 2015 and had their son, Jayden in 2016, started having issues after the birth of their son with news of trouble in their marriage awash on social media until they both decided to part ways as husband and wife.

A source who gave reason for their decision to separate, stated that the actress always complained about how distanced her husband was. “He never showed up in any of her filming location and this was often a thing of worry for Lilian”, he said. Other reports claimed infidelity and physical abuse as the reason their wedding packed up immediately their son Jayden was born. 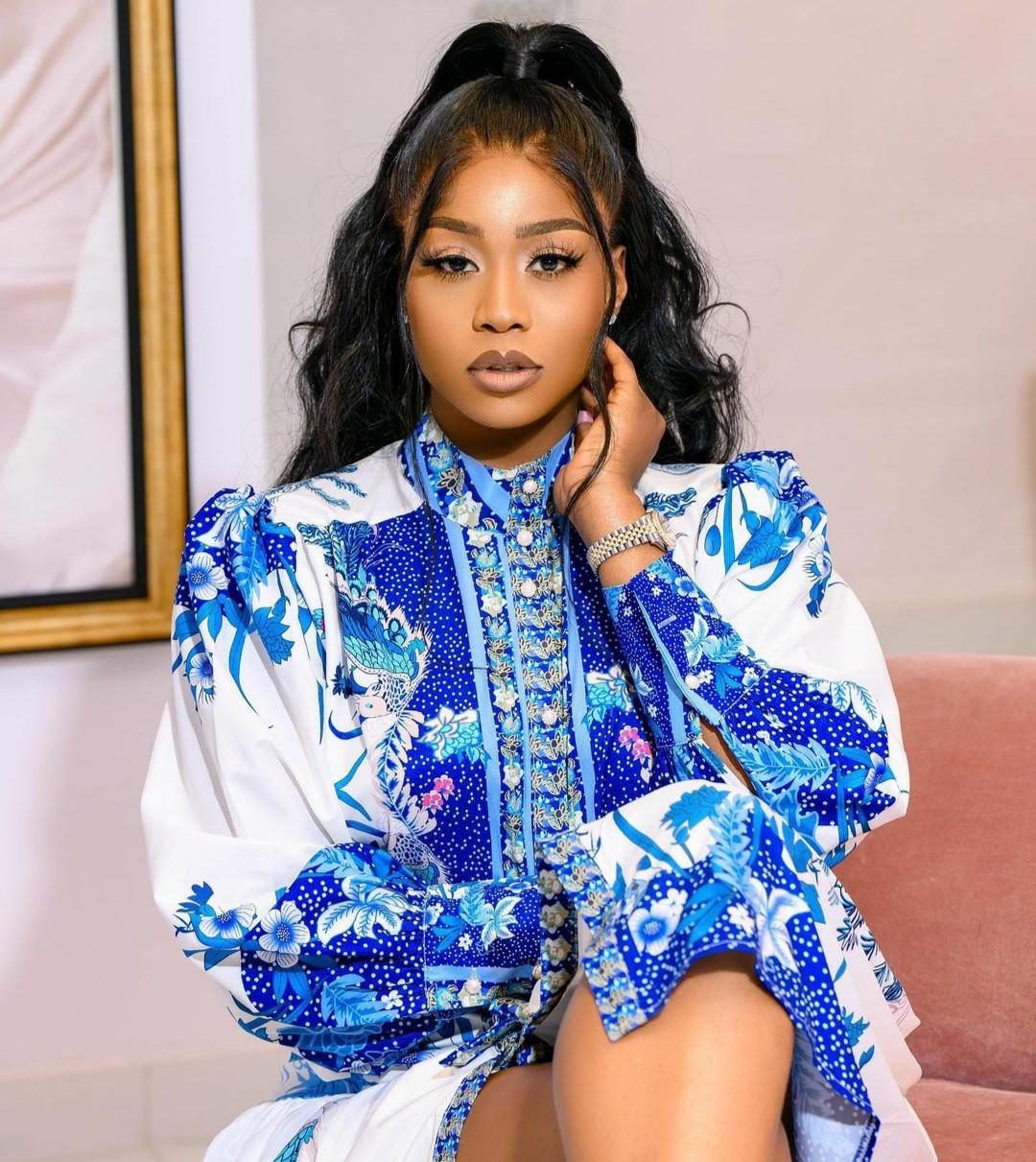 Lilian Afegbai took to Instagram to encourage her followers after she bought a Birkin bag worth $22K.

The actress shared a photo of the bag and a screenshot of the transaction details and wrote: "There’s time for everything, I got this for my birthday but it arrived late... 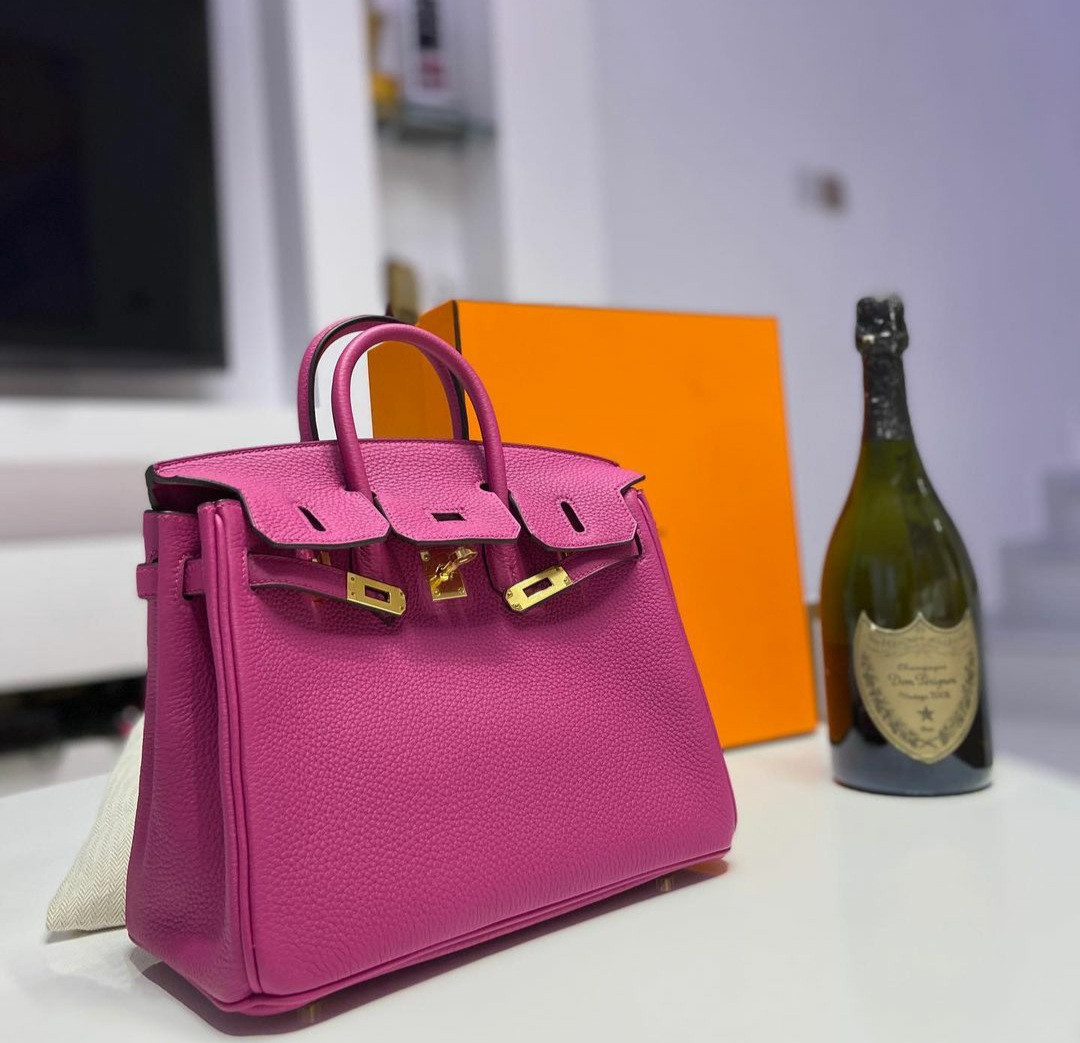 "I remember when I could only afford an Aldo or Zara bag.... Now I can get myself a birkin worth 22k dollars.

"Enjoy the process, very soon you will get everything you want. It just takes time. More to come." 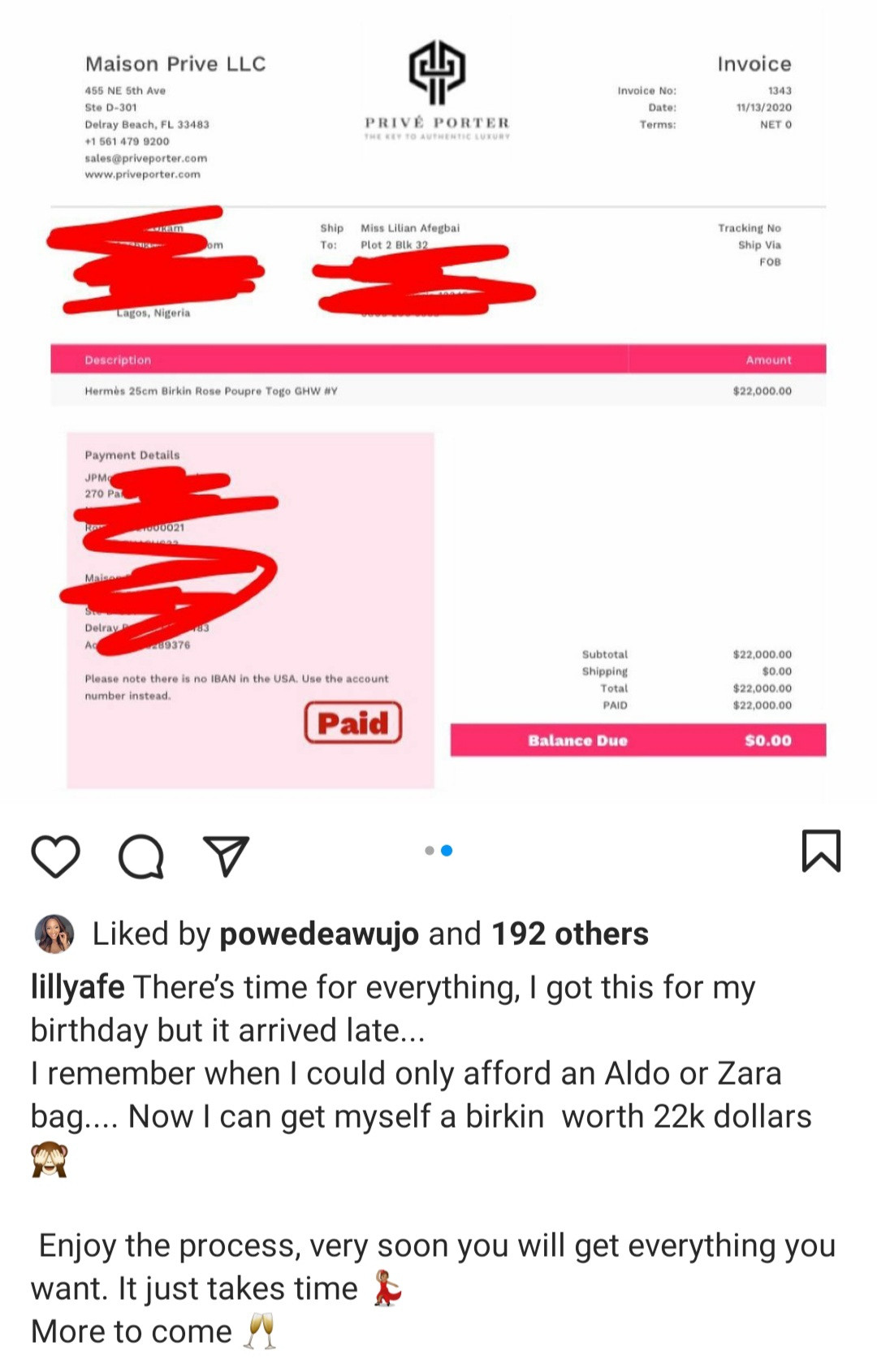